For all its superb optical properties, fused silica glass is too brittle to withstand the computer-controlled machining processes used in today’s industries. Now, researchers at a German university have developed a nanocomposite material of mixed glass and polymer particles that can be shaped with polymer-molding techniques, then heat-treated to change into optical-grade glass (Adv. Mater., doi:10.1002/adma.201707100).

The material, dubbed Glassomer, consists of amorphous quartz-glass particles with a diameter of about 100 nm, mixed in with the monomer hydroxyethylmethacrylate (HEMA) and the solvent phenoxyethanol (POE). Bastian Rapp and his colleagues at the Karlsruhe Institute of Technology in Germany then polymerized the material, which became a solid at room temperature. The glass nanoparticles constitute about 60 percent of the mixture by volume.

The researchers carved a chunk of Glassomer into a small flower shape with a small knife and also subjected the material to high-throughput subtractive machining processes that are routinely used to shape polymer parts: milling, lathing and ablation with a femtosecond infrared laser.

To create the finished glass pieces, the scientists subjected the Glassomer shapes to a process called thermal debinding: heating the pieces to 800 ºC to burn off the polymer matrix, which becomes carbon dioxide, leaving the silica behind as a solid. At this stage, the material looks slightly brown. Finally, the shapes were sintered at 1,300 ºC, which closes the tiny pores between the original particles, leaving only the shaped glass.

Rapp’s group tested the optical properties of the final pieces and found them comparable to commercially available quartz glass. The fully processed Glassomer glass had a density of 2.2 g/cm3 and linear shrinkage of roughly 15.6 percent, in line with theoretical predictions.

Over the last two years, the Karlsruhe scientists have developed glass-polymer composites that can be molded (Adv. Mater., doi:10.1002/adma.201506089) and shaped with a 3-D printer (Nature, doi:10.1038/nature22061). Rapp’s laboratory is creating a spinoff to commercialize the technology. 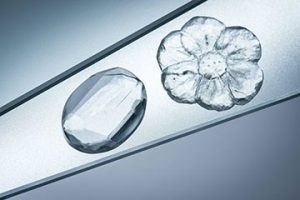 With Glassomer, glass components like these can be produced by cutting. [Image: Markus Breig, KIT]